Rosenberg Alfred - The Myth of the 20th Century 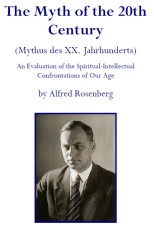 Author : Rosenberg Alfred
Title : The Myth of the 20th Century An Evaluation of the Spiritual-Intellectual Confrontations of Our Age
Year : 1930

Preface. All present day struggles for power are outward effects of an inward collapse. All State systems of 1914 have already collapsed, even if in part they still formally exist. Collapsed also have social, church and ideological creeds and values. No highest principle, no supreme idea governs undisputed the life of Folks. Group struggles against group, party against party, national values against international dogmas, rigid imperialism against spreading pacifism. Finance with its golden meshes swallows States and Folk, economy becomes nomadic, life is uprooted. The Great War, as the beginning of a world revolution in all domains, has revealed the tragic fact that, although millions sacrificed their lives, this sacrifice was to the advantage of forces other than those for which the armies were ready to die. The dead of the war were victims of a catastrophic epoch that had lost all its values, but at the same time—and this is something which begins to be grasped in Germany today, even if so far by few—the martyrs of a new dawn, of a new faith. The blood which died, begins to live. In its mystical sign the cells of the German Folkish soul renew themselves. Past and present suddenly appear in a new light, and for the future there results a new mission. History and the task of the future no longer signify the struggle of class against class or the conflict between one church dogma and another, but the settlement between blood and blood, race and race, Folk and Folk. And that means: the struggle of spiritual values against each other. However, the values of the racial soul, which stand as driving forces behind this new image of the world, have not yet become a living consciousness. Soul means race seen from within. And, conversely, race is the external side of a soul. To awaken the racial soul to life means to recognise its highest value, and, under its dominance, to allot to other values their organic position in the State, in art, and in religion. That is the task of our century; to create a new human type out of a new view of life. And for this, courage is needed; courage of each single individual, courage of the entire generation growing up, indeed of many following generations. For chaos has never been mastered by those without courage, and a world has never been built by cowards. Whoever wishes to go forward, must therefore also burn bridges behind him. Whoever sets out on a great journey, must leave old household goods behind. Whoever strives for what is highest, must turn his back on what is lesser. And to all doubts and questions the new man of the coming great German Reich knows only one answer: I alone will triumph! Despite the fact that so many today agree with these words, nevertheless no community can as yet be established on the basis of the ideas and conclusions laid down in this work. These are personal avowals throughout, not points in the program of the political movement to which I belong. This has its own great special task, and as an organisation must keep itself remote from disputes of a religious, churchish political kind, as well as from the obligation to a definite philosophy of art or a fixed style of architecture. Thus it cannot also be made responsible for what is put forward here. Philosophical, religious, artistic convictions are only to be based on the prerequisite of personal freedom of conscience, and that is the case here. The work, however, is not directed at persons who live and work happily and firmly rooted within their own faith communities, but certainly at all those who, inwardly released from the latter, have still not fought their way forward to new ideological links. The fact that these already number millions lays obligations on every fellow fighter to help himself and other seekers through deeper reflection. This work, the basic idea of which goes back to 1917, was already completed in fundamentals in 1925, but new everyday duties again and again held up its final appearance. Works of colleagues or opponents then demanded renewed attention to questions which had hitherto been put aside. Not for a moment do I believe that here a solution to the great themes placed before us by destiny has been achieved. But I certainly hope to have clearly posed questions and to have coherently answered them as the foundation for the bringing about a day of which we all dream. Alfred Rosenberg, Munich, February 1930. ...