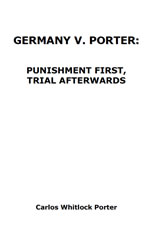 Introduction. On April 25, 1995, a former member of the Wehrmacht (not the SS), Reinhold Elstner, burnt himself to death at the Feldherrnhalle in Munich to protest what he called the “Niagara of lies” engulfing Germany. Astonishingly, the Munich police had the shamelessness to arrest people for placing wreaths on the spot, and to remove all the burn marks with a blow torch. In protest, I sent over 200 copies of NICHT SCHULDIG IN NÜRNBERG, a German translation of NOT GUILTY AT NUREMBERG, a brochure authored by myself, accompanied by a protest letter, one to every important newspaper, magazine and politician in the country, to Helmut Kohl, Richard von Weizsäcker and five others by registered mail, to make sure they got it. The Mayor of Munich, a certain Christian Ude, got his knickers in a twist and the result was 17 months of so-called “legal proceedings” during which I told them more or less to bugger off. Of course, I was polite about it: I said, “I defy your authority and I refuse to comply with any order to do anything.” For 17 months, the German courts ignored everything introduced by the Defendant, i.e., myself, in reply to the avalanche of subpoenas, summonses, certified letters, certified translations, demands for payment, etc. Jokes, insults, sarcasm, refusals to appear, demands for the production of evidence, irrefutable legal arguments, refusals to pay, etc. were all ignored – like a computer continually displaying the same error message. ...