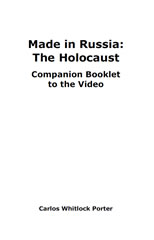 Author : Porter Carlos Whitlock
Title : Made in Russia The Holocaust Companion booklet to the video
Year : 2017

Acknowledgments. In the late summer or early fall of 1988, on location in Luxembourg, together with Ernst Zündel and his video cameraman, I made a 90- minute-long video presentation of documents from the First Nuremberg Trial entitled Made In Russia: The Holocaust, from the book of the same name. Unfortunately, Mr. Zündel’s cameraman failed to focus on the documents so that the viewers could read them! I asked him why he did this, and he replied, “Let them buy the book”. But most of the documents shown were not even featured in the book! The result was that people have been looking at illegible documents for nearly 30 years. By the time the video made its way to the Internet in 2007, no more first-generation copies could be found: a further blow to video quality. In response to the many complaints from YouTube viewers relating to the quality of the video, I promised them a transcription and a book showing the documents. The present diminutive little tome is the fulfilment of that promise. Fortunately, thanks to a couple of highly-skilled young graphic artists, of, I believe, French nationality, whose full identities are unknown to me – “Didi” and “Arno” – the video has now been restored – in as much as possible – with modern scans of many of the same documents or skilled restorations of the same. I was indeed fortunate in being able to rely upon the assistance of such dedicated, skilled people. For this and other work by “Didi” on her own website, google search “didi un grain de sable” (“one grain of sand”). On YouTube, search “Made in Russia the Holocaust Didi 18” (banned in France). (For what appears to be a recently-discovered first generation copy of the original video, search YouTube for “Made in Russia the Holocaust John Robinson”.) Thank you, Didi, thank you, Arno, thank you, John Robinson. ...