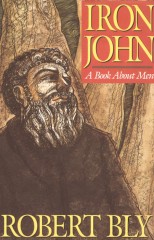 Preface. We are living at an important and fruitful moment now, for it is dear to men that the images of adult manhood given by the popular culture are worn out; a man can no longer depend on them. By the time a man is thirty-five he knows that the images of the right man, the tough man, the true man which he received in high school do not work in life. Such a man is open to new visions of what a man is or could be. The hearth and fairy stories have passed, as water through fifty feet of soil, through generations of men and women, and we can trust their images more than, say, those invented by Hans Christian Andersen. The images the old stories give-stealing the key from under the mother's pillow, picking up a golden feather fallen from the burning breast of the Firebird, finding the Wild Man under the lake water, following the tracks of one's own wound through the forest and finding that it resembles the tracks of à god-these are meant to be taken slowly into the body. They continue to unfold, once taken in. It is in the old myths that we hear, for example, of Zeus energy, that positive leadership energy in men, which popular culture constantly declares does not exist; from King Arthur we learn the value of the male mentor in the lives of young men; we hear from the Iron John story the importance of moving from the mother's realm to the father's realm; and from ali initiation stories we learn how essential it is to leave our parental expectations entirely and find a second father or "second King." There is male initiation, female initiation, and human initiation. In this book I am talking about male initiation only. I want to make clear that this book does not seek to turn men against women, nor to return men to the domineering mode that has led to repression of women and their values for centuries. The thought in this book does not constitute a challenge to the .women's movement. The two movements are related to each other, but each moves on a separate timetable. The grief in men has been increasing steadily since the start of the Industrial Revolution and the grief has reached a depth now that cannot be ignored. The dark side of men is clear. Their mad exploitation of earth resources, devaluation and humiliation of women, and obsession with tribal warfare are undeniable. Genetic inheritance contributes to their obsessions, but also culture and environment. We have defective mythologies that ignore masculine depth of feeling, as-· sign men a place in the sky instead of earth, teach obedience to the wrong powers, work to keep men boys, and entangle both men and women in systems of industrial domination that exclude both matriarchy and patriarchy. Most of the language in this book speaks to heterosexual men but does not exclude homosexual men. It wasn't until the eighteenth century that people ever used the term homosexual; before that time gay men were understood simply as a part of the large community of men. The mythology as I see it does not make a big distinction between homosexual and heterosexual men. I speak of the Wild Man in this book, and the distinction between the savage man and the Wild Man is crucial throughout. The savage mode does great damage to soul, earth, and humankind; we can say that though the savage man is wounded he prefers not to examine it. The Wild Man, who. has ex'amined his wound, resembles a Zen priest, a shaman, or a woodsman more than a savage. The knowledge of how to build a nest in a barc trec, how to fly to the wintering place, how to perform the mating dance-aU of this information is stored in the reservoirs of the bird's instinctuai brain. But human beings, sensing how much fiexibility they might need in meeting new situations, decided to store this sort of knowledge outside the instinctual system; they stored it in stories. Stories, then-fairy stories, legends, myths, hearth stories- amount to a reservoir where we keep new ways of responding that we can adopt when the conventional and current ways wear out. Sorne of the great students of this reservoir in recent centuries have been George Groddeck, Gurdjieff, Carl Jung, Heinrich Zim-. mer, Joseph Campbell, and Georges Dumezil. My first teacher in unfolding the fairy story was Marie-Louise von Franz, and I have tried to be as true to the masculine stories as she has been to the feminine in her many books. This book draws on a whole community of men, many of whom worked in this field long before I entered it. First among those is Alexander Mitscherlich, the German analyst, who died in 1981, and many fine thinkers in English as weil. I am indebted deeply to the men with whom I have joyfully taught during the last eight years-Michael Meade, James Hillman, Terry Dobson, Robert Moore, and John Stokes, among many others. I thank Keith Thompson for his interest in the men's material; the first chapter is a rewriting of his interview with me. And I thank my editor, William Patrick, for his enthusiasm and insight. I am grateful also to the many men who have trusted me enough to listen, and have honored me by telling me their own stories, or have simply sung, danced, or wept. Even though in this book I lay out an initiatory path in eight stages, other men may see a different order of those stages, or entirely different stages. We make the path by walking. Antonio Machado said: You walker, there are no roads, only wind traits on the sea. Robert Bly ...