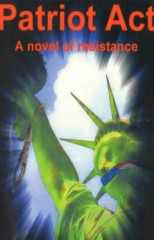 Acknowledgments. I wish to thank ali of those at Stormfront, whose suggestions and votes helped choose the final cover design and tweak it to perfection, and for those that gave me suggestions and help, when this softwareilliterate writer needed technical assistance and a website. Thanks go out to my dad, Robert, who has always supported my love of firearms and writing, Bekka, Casper, Cootie, Kira, Lauri (for those grammar tips), Lynn, Sallee, Virginia, and that jerk at the photo ab in Bridgehamptom, Long Island for calling the police on me for my 1919 pictures. I couldn 't have added that scene if not for y our left-wing, Liberal, freedom-hating, gun-fearing, I -wanna-be-a-big-hero-and-reporta- terrorist-just-like-TIPS mentality. Way to run this country into the ground, Snitch. A special thanks to Bekka, who gave me permission to use her real-life "scareport" horror story as part of the drama in this book. Her fortitude and refusai to cave to the demands of the System commands respect, and she has mine. 14, Girl! Extra-special thanks to the real Sallee, whom the character of Sallee Schoenbraun is based upon. It was written for you, Angel. Triple-special thanks to ali the 2"d Amendment and freedom-loving men, women, children, and organizations out there that refuse to give up. Keep up the fight! They'll pry them from our cold, dead, White fingers! Most of ali, thanks to the United States Constitution, whose 151 Amendment gave me the right to write this book, and the 2"d Amendment which allowed me to tire, and in sorne cases build from scratch, the firearms referred to in the story. Last, and certainly not !east, a big thank you to ali the red-blooded men, women, and children who have sacrificed their lives for their beliefs, and the right to be left alone from an overbearing government. Y ou may be gone, but you are not forgotten. Remember the seventeen little children that burned to death in Waco; never forget their deaths caused by an over-zea1ous bureaucrat. Never forget! We must prevail, or we shaH certainly perish. ...