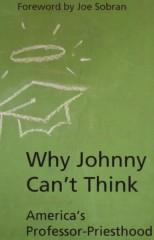 Why Johnny Can 't Think is an odd book, if you can even call it a book. Its tone, thesis, and style are defiantly anti-academic. Many would call it anti-intellectual- and soit is, if the life of the mind is equated with the people we call intellectuals. lt doesn't rely on charts and statistics; it appeals to common sense. A former professer himself, Bob Whitaker believes that formai education has become dangerous, and often fatal, to common sense. This is nothing new, but Americans believe so deeply in formai education that they routinely sacrifice their children's youth to it, often paying staggering amounts ofmoney to shield them from the real world. Bob reminds us that in the Middle Ages, the advance of science was retarded not by the ignorant, but by the learned. All educated people "knew" that heavy bodies fell faster than light ones, and that men had more teeth than women. The great Aristotle had said so. And educated people preferred the authority of Aristotle to the simplest experiments and observations, which could have told them that the great Aristotle was just plain wrong. Today the sciences are taught on a sounder basis. But, says Whitaker, the "social" sciences are another matter. These "social" sciences are often directly contradicted by the hard sciences. They are built on ideas and theories that are not only un proven, but demonstrably and obviously false. Yet they are aggressively promoted by the academy, followed by the media and the government, and anyone who openly denies them can forget about a career in these institutions. Even real scientists are forced to bow to the idols of "social" science. This system of modem dogmas, of superstitions passing for scientific knowledge form what is now called "Political Correctness," closely linked to "Multiculturalism." It trains the young to accept and parrot the notion that all races, cultures, sexes, and sexual practices are equal, and that it is a grave thought-crime to deny this. Political Correctness, like Aristotle's physics in the Middle Ages, is what every educated persan "knows." And a huge class of professional educators is richly rewarded for teaching it. True science is based on demonstration, not authority. But it is only authority that sustains - and enforces - the doctrines of Poli ti cal Correctness. And this authority is supported by enormous amounts of public money. As Whitaker reminds us, formai education is far and away the biggest industry in the United States. Americans pay trillions of dollars, in both taxes and private tuition, to have their children indoctrinated in a false and destructive ideology, which serves as the basis for a series of disastrous public policies. ln Whitaker's words, "Nothing liberais do ever WORKS." That bluntness is typical. You may feel that Whitaker could use a little more qualification, subtlety, and even statistical evidence here and there. But British understatement isn't his style. For Bob Whitaker, nuance is something they do in Europe. He isn't really trying to prove anything. He's trying to make you open your eyes. He dares you to tell him he's wrong, when reality is there, big as life, to back him up. He never tries to be elever; he likes to say what is startlingly obvious- but, thanks to the code of Political Correctness, ta boo. Whitaker is at his funniest and most scathing when he discusses the liberal's most valuable ally: the "respectable" conservative, whose role is to reinforce liberalism by treating it with respect. This respect is what makes him "respectable." That is, welcome in the media as liberalism's loyal opposition. The conservative who gives liberalism the horselaugh it deserves quickly forfeits any hope of being invited back. Whitaker long ago ceased being invited back. Liberal programs don't just fail; they backfire, aggrava ting the problems they are meant to solve and destroying the things they are supposed to improve. But they are rarely repealed. They become entrenched, and the public, "educated" to accept the authority ofliberalism, forgets how much better many things were before liberalism started improving them. Unlike "respectable" conservatives, Whitaker remembers. He sees. And he laughs. Joseph So bran ...