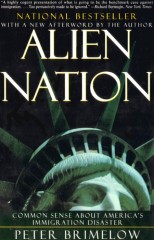 Preface: Common Sense. About Immigration. There is a sense in which current immigration policy is Adolf Hitler's posthumous revenge on America. The U.S. political elite emerged from the war passionately concemed to cleanse itself from ali taints of racism or xenophobia. Eventually, it enacted the epochal Immigration Act (technically, the Immigration and Nationality Act Amendments) of 1965. And this, quite accidentally, triggered a renewed mass immigration, so huge and so systematically different from anything that had gone before as to transform-and ultimately, perhaps, even to destroy-the one unquestioned victor ofWorld War II: the American nation, as it had evolved by the middle of the twentieth century. ...