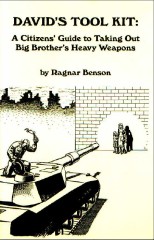 What do you do wben faced witb the overwhelming firepower of rutbless authority? Fight back, that's whatl Ragnar Benson provides citizen defenders with the information they need to mount a successful campaign against overwhelming odds ... and win! Leambow to: • Employ homemade explosives and detOnators • Construct Molotov cocktails • Build effective flame tbrowers • Select accu rate sniper rifles and scopes • Place claymore mines • Generale smoke • Use two-way radios • ldentify tanks, helicopters, armored personnel carriers, tbin-sldnned utility vebicles, belicopters and jet aircraft... and take them out! Brief histories of armed resistance and tank warfare are included, along witb a detailed analysis of antitank procedures. Learn how to defend against and neutralize mortars, artillery, heavy weapons and their carriers. This may be the most essential self-defense book ever written! A must for every citizen defender who wants to fight the power! ...