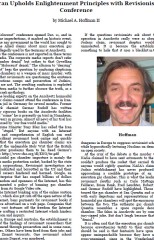 Iran's "Holocaust" conference opened Dec. 11, and in spite of some imperfections, it marked an historic event, the first time any government in the world has sought to examine the Allied claims about mass execution gas chambers allegedly used by the Germans at Auschwitz. Of course the conference is not reported in these terms by "our" media. The corporate media reports don't refer to "gas chamber denial" but rather to that Orwellian neologism, "Holocaust' denial." The allusion to "denying" a "Holocaust" begs the question by confusing skepticism toward gas chambers as a weapon of mass murder, with the notion that revisionists are questioning the existence of concentrations camps and persecution of Judaics, which they are not. The resulting confusion is exploited by the Western media to further obscure the truth, as a service to Israeli mythology. ...