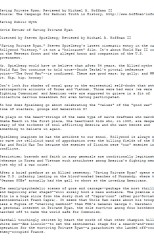 "Saving Private Ryan," Steven Spielberg's latest cinematic entry in the canon of Hollywood "history," is not a "holocaust" film. It's about World War II combat on the Western front and the alleged honor and compassion of the U.S. government. Mr. Spielberg would have us believe that after 54 years, the Allied myths about World War Two continue to hold true--Studs Terkel's pivotal reference point "The Good War" is confirmed. There are good wars, by golly, and WWII was it. Hip, hip, hooray! Don't look for shades of moral gray or the existential self-doubt that attends retrospective accounts of Korea and Vietnam. Those were bad wars (we were fighting Communism) and American vets are supposed to grieve in a fit of collective nervous breakdown for even having participated. So how does Spielberg go about celebrating the "values" of the "good war" in a time of slackers, grunge and Generation X? ...