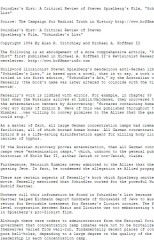 The following is an abridgement of a more comprehensive article, "Swindler's Mist" first published in Michael A. Hoffman II's Revisionist Researcher newsletter. http://www.hoffman-info.com Hollywood illusionist Steven Spielberg's mendacious anti-German libel, "Schindler's List," is based upon a novel, that is to say, a work of fiction, titled in its first edition, "Schindler's Ark," by the Australian writer Thomas Keneally (the book's name was later altered to coincide with the title of the movie). Keneally's work is riddled with errors. For example, in chapter 33 he states that when the Russians arrived at Lublin/Majdanek, they uncovered the secret of the extermination centers by discovering: "furnaces containing human bones and over 500 drums of Zyklon B. News of this was published throughout the world, and Himmler...was willing to convey promises to the Allies that the gassings of Jews would stop." ...