Hoffman II Michael A. - They Were White And They Were Slaves 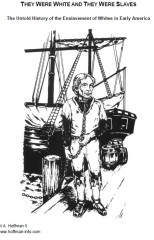 Author : Hoffman II Michael A.
Title : They Were White And They Were Slaves The Untold History of the Enslavement of Whites in Early America
Year : 1993

Introduction. “They were of two sorts, first such as were brought over by masters of ships to be sold as servants. Such as we call them my dear,’ says she, ‘but they are more properly called slaves.” —Daniel Defoe, Moll Flanders This is a history of White people that has never been told in any coherent form, largely because most modern historians have, for reasons of politics or psychology, refused to recognize White slaves in early America as just that. Today, not a tear is shed for the sufferings of millions of our own enslaved forefathers. 200 years of White slavery in America have been almost completely obliterated from the collective memory of the American people. Who wants to be reminded that half—perhaps as many as thirds—of the original American colonists came here, not of their own free will, but kidnapped, shanghaied, impressed, duped, beguiled, and yes, in chains?... we tend to gloss over it... we’d prefer to forget the whole sorry chapter... “(Elaine Kendall, Los Angeles Times, Sept. 1, 1985). A correct understanding of the authentic history of the enslavement of Whites in America could have profound consequences for the future of the races: “We cannot be sure that the position of the earliest Africans differed markedly from that of the white indentured servants. The debate has considerable significance for the interpretation of race relations in American history” (Eugene D. Genovese, Roll, Jordan Roll: The World the Slaves Made, p. 31). Most of the books on White labor in early America are titled with words like “White indentured servi-tude,” White “bondservants,” White “servants” etc. It is interesting that White people who were bound to a condition of what became in many cases permanent chattel slavery unto death, are not referred to as slaves by Establishment academics. With the massive concentration of educational and media resources on the negro experience of slavery the unspoken assumption has been that only Blacks have been enslaved to any degree or magnitude worthy of study or memorial. The historical record reveals that this is not the case, how-ever. White people have been sold as slaves for centuries. ...