Hoffman II Michael A. - Lieberman Moshe - The Israeli Holocaust Against the Palestinians 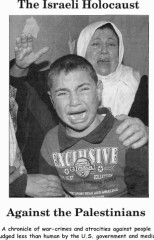 Authors : Hoffman II Michael A. - Lieberman Moshe
Title : The Israeli Holocaust Against the Palestinians A chronicle of war-crimes and atrocities against people judged less than human by the U.S. government and media
Year : 2002

Every year in April there is Yom Has Shoa day in the religion of Judaism, marked universally in the otherwise secular West under the rubric, "Holocaust Remembrance Day." How ironic that in the midst of the Israeli army massacre of Palestinians in Jenin on April 9, 2002, Israeli Prime Minister Ariel Sharon together with the Chief Ashkenazi Rabbi, Rabbi Meir Lau (above), solemnly commemorated "Holocaust Remembrance Day" in Jerusalem to mourn "the Nazi massacres of Jews." ...