Zahner Dee - The Secret Side of History 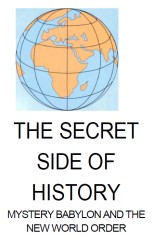 What is the world's most destructive philosophy? What is the greatest hindrance to man's progress? What is money? Can you trust the news media? Is there a hidden power that controls world events? Does the United States have a secret government? Introduction Beginning in the early 1960s, an increasing number of books and articles exposing the existence of a powerful world wide movement dedicated to creating a New World Order began to appear. Although the news media ignored these books and articles, as time passed, the media's own headlines bore out the worth of their allegations. As the evidence accumulated, an amazing parallel to a world structure pictured in the seventeenth and eighteenth chapter of the Book of Revelation became apparent. This book is the result of viewing that unfolding parallel for nearly thirty years. Since our subject deals in part with Bible prophecy, we wish to state at the very beginning that no Scriptural prophecy directs believers to acquiesce to evil. The admonition given in Romans 12:21 to, "Be not overcome of evil, but overcome evil with good" applies to all situations whenever and wherever evil appears. Since the beginning of recorded history mankind has been involved in a continuous struggle between good and evil, between the spiritual forces of light and the spiritual forces of darkness. No place in Scripture is there an admonition for believers to be passive bystanders. Throughout history those working for good have worked openly and often alone. Those working for evil have worked in secret and have usually been organized. Because of this, the secret side of history has often been the instigator of major world events. Since as recorded in Luke 12:2, "For there is nothing covered, that shall not be revealed;..." those secrets eventually come to light. Unfortunately, this often occurs after the damage has been done. Although ignored by most historians, the secret side of history is usually the most important part of history. By the secret side of history we mean the behind-the-scenes forces, individuals, and decisions withheld from the general public. This book seeks to stimulate readers to search out the organized forces behind contemporary events, and to use truth as a weapon against the perpetrators of evil deeds. While doing so, it will be necessary not only to examine some of the men and organizations involved in today's secret side of history, it will be necessary also to examine some of the important individuals and organizations that are working to delay and eventually block the movement to lead the entire human race into a Satanic New World Order. It may surprise our most perceptive readers to learn that the Apostle John, writing more than 1900 years ago, described the existence of a political and spiritual giant that parallels today's emerging New World Order. Not only did the Apostle describe its attributes and center of power ("that great city, which reigneth over the kings of the earth" Rev. 17:18) he also foretold its sudden loss of wealth and total destruction, all coming at a time when its leaders were at the height of their smug confidence. The Apostle labeled this evil center of world control "Mystery, Babylon The Great." In order to show the similarity between Mystery Babylon's days and what has transpired during the twentieth century, we will detail the events of each period, events often on the secret side of history. Lest our readers take refuge in Scripture's predicted fall of any Mystery Babylon, we hasten to quote an imperative command given to believers concerning this or any evil design for world power. In Revelation 18:4, the Apostle John relays this message: Come out of her, my people, that ye be not partakers of her sins, and that ye receive not of her plagues. ...