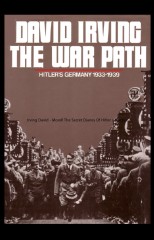 Author’s Foreword. This book narrates one man’s path to war – Adolf Hitler’s. The narrative ends at the precise moment when the companion volume, Hitler’s War, begins: the evening of 3 September 1939, as he leaves his Berlin Chancellery for the Polish warfront. Like that volume, The War Path also tries to describe events from behind the Führer’s desk, and to see and understand each episode through his eyes. The technique necessarily narrows the viewpoint, but it does help to explain otherwise inexplicable decisions. Nobody that I know of has attempted this before, but to me it seemed worth all the effort: after all, Hitler’s war sucked in one country after another, left forty million dead and caused all Europe and half of Asia to be wasted by fire and explosives; it destroyed Hitler’s Third Reich, bankrupted Britain and lost her her empire, and brought lasting disorder to the world’s affairs; it saw the entrenchment of communism in one continent, and its emergence in another. I have approached the main narrative in logical chronological sequence. How Hitler actually came to power in 1933 is merely outlined here – the topic has been proficiently covered by others, particularly Karl Dietrich Bracher and Wolfgang Sauer. The focus of my research fell on his years of power, and from 3 February 1933, when Hitler tells his generals in secret of his ambition to launch a war of imperial conquest in the east as soon as Germany is able, the detail thickens and the colour becomes enriched. Fieldwork can be expensive and unrewarding, though it always carries with it the exhilarating hope of sudden revelation. It is an acquired taste. It means bargaining for years with governments like that of East Germany for permission to search for buried documents; it means long separations from wife and family, sleeping on overnight trains, and haggling with retired generals and politicians or their widows, to part them temporarily from their carefully guarded caches of diaries or letters. It means leafing through hundreds of thousands of pages of filthy paper in remote and chilly archives, intuitively registering egregious facts in the hope that some of them may, perhaps, click with facts found years later in another file five thousand miles away. ...