MacDonogh Giles - After The Reich 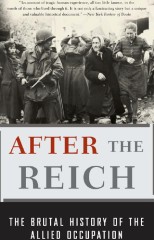 Author : MacDonogh Giles
Title : After The Reich The Brutal History Of The Allied Occupation
Year : 2007

PRAISE FOR AFTER THE REICH. “In After the Reich, Giles MacDonogh, a British author of several books about German history, chronicles the final weeks of the war and the occupation that followed. His ambitious mission: to offer a comprehensive, unsparing account of what happened to the German people when the tables were turned. MacDonogh works to assemble a massive indictment of the victors, and his array of detail and individual stories is both impressive and exhausting.” —Washington Post Book World “In his meticulously researched book After the Reich, British-born Giles MacDonogh, an expert in German history, offers a different view of this ‘noble’ war’s aftermath. With unsparing detail and ample documentation, he chronicles the events after the victory in Europe in May 1945 to the Berlin airlift four years later, and exposes the slippery slope of the moral high ground many of us believed the Allies possessed during those years. . . . One cannot read After the Reich without thinking of the phrase ‘winning the war but losing the peace’ as the book draws a line from the occupation directly to the division of Berlin and the Cold War that gripped much of the world and informed foreign relations for the next 60 years. Scars across Europe from the post–World War II era remain, and MacDonogh has picked the scab at a time of modern war and occupation when, perhaps, the world most needs to examine an old wound.” —Boston Globe “VE Day on May 8, 1945 mocked the subsequent condition of Europe. As crowds in London, Paris, and New York celebrated the declaration of peace, much more misery and death lay ahead. Two, perhaps three million Germans perished in the years that followed: in captivity; from hunger and casual violence; and above all, during the expulsions of ethnic Germans from the east, on which the western Allies had agreed with the Russians before hostilities ended. Giles MacDonogh’s book chronicles this saga from the liberation of Vienna to the 1948 Berlin airlift and 1949 formation of Konrad Adenauer’s government in Bonn. It makes grimmer reading than most war stories, because there is little redemptive courage or virtue. Here is a catalogue of pillage, rape, starvation, inhumanity, and suffering on a titanic scale. . . . The book brings together many stories that deserve to be much better known in the West.” —Max Hastings, Sunday Times (London) “Giles MacDonogh’s After the Reich is important and timely. He has a profound understanding of Germany, which he communicates in a humane and engaging style. Though he is sensitive to the sufferings of the Germans after the war, he never loses sight of the fact that this was an occupation that the Western powers got right. After the Reich is a remarkable book, with a rich cast of characters, and it has oblique relevance to our own problems in the wider world.” —Michael Burleigh, author of The Third Reich: A New History and Sacred Causes “Mr. MacDonogh has given readers the history of an era all too often ignored.” —Contemporary Review “The bitter experiences of a defeated Germany have often been forgotten. MacDonogh’s book, drawing heavily on the often moving testimony of those who lived through them, brings them brilliantly into the light.” —Sunday Times “Unique and important.” —Guardian “Mass deportations, murder, and brutalization of helpless noncombatants— these are the crimes one readily associates with Hitler’s minions as they ravaged their way across Europe. But MacDonogh, a journalist with particular expertise in German history, convincingly illustrates that this was the fate of millions of German-speaking civilians in the period from the fall of Vienna to the Soviets to the Berlin airlift. . . . Given the horrors visited upon Europe by the Nazis, one might be tempted to consider these atrocities as just retribution. However, MacDonogh’s eloquent account of the suffering of these people is, one hopes, able to evoke strong feelings of both revulsion and compassion from most readers.” —ALA Booklist “This absorbing study of the Allied occupation of Germany and Austria from 1945 to 1949 shows that the end of WWII by no means ended the suffering. A vengeful Red Army visited on German women an ordeal of mass rape, while looting the Soviet occupation zone of almost everything of value. . . . The result is a sobering view of how vengeance stained Allied victory.” —Publishers Weekly “Throughout time it has been the victor who has written history, but here historian MacDonogh examines the darker side of the Allied occupation of defeated Germany. . . . Of interest to students of modern Europe, complementing W. G. Sebald’s On the Natural History of Destruction (2003) and other studies of history from the point of view of the vanquished.” —Kirkus Reviews ...