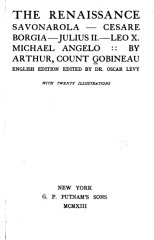 It has been generally thought and stated that the past century was a profoundly irreverent and irreligious age, the age of the twilight of old gods, the shattering of old idols, the ruin of cin old and holy creed. Nothing, however, could be further from the truth. In every department of human knowledge, in philosophy, in science, and in politics as well as in art, the nineteenth century was deeply imbued with religious ideas; nay, spoilt by what may almost be called a spiritual intoxication. It was the only century known to history in which theology and its favourite offspring, morality, had swamped everybody and everything. Whether it paraded itself as cold and scientific, as warm and humanitarian, as lukewarm and agnostic, as progressive and liberal, as ethical and socialistic, as anarchical and revolutionary, as conservative and reactionary, as rationalistic and freethinking or as romantic and artistic, there was always one and the same personality behind that cloak of many colours, behind that medley of divers fashions ; and that personality was a good man, a religious man—a Christian. ...