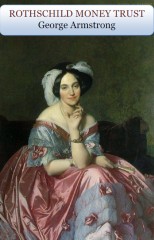 THE PROTOCOLS. "For ages past the sons of Israel, despised and persecuted, have been working to open up a path to power. They are hitting the mark. They control the eco-nomic life of the accursed Christians; their influence preponderates over poli-ticians and over manners."-—From "Funeral Oration of Rabbi Reichhorn." Professor Serge Nilus of Russia published the Jewish "Protocols" in 1905. They purport to represent the minutes of secret meetings of the leading men of the Jewish race, and to set forth their plans for acquiring the wealth of the peoples of the world, for the overthrow of all governments, and for the creation of the Kingdom of the Jews with a Jewish king. It is stated in the introduction of the booklet that the protocols means "minutes of the proceedings of the Learned Elders of Zion and that these protocols give the substance of addresses deli-vered to the innermost circles of the rulers of Zion." It is also stated that "the presumption is strong that the protocols were issued or re-issued at the first Zionist Congress held at Basle (Switzerland) in 1897 under the presidency of the father of modern Zionism, the late Theodore Herzl." It is also stated that the names of the present elders are a profound secret, that they are the "Hidden Hand" that rules the world, and that they probably consist of "three hundred men, each of whom knows all of the others, govern the fate of the European continent, and they elect their successors from their entourage." (Quoting the late Walter Rathnau, a Jew of Germany, as au-thority.) The "Learned Elders of Zion" was probably a religious order in the beginning, as indicated by the name. But if such was the original foundation of the order, its character, and likewise its name, has since been changed. It is now purely a political racial organization and its present name is the "Council of the Jewish Agency." It is likely that the name was changed on account of the exposure by Nilus. This order must be distinguished from "Elders of the Synagogue" and "Elders of Israel," which are purely religious organizations. It must also be distinguished from the "Zionist Congress" and "Zionist General Council." These two latter organizations are semi-religious and semi-political and they are also semi-secret and semi-public. They are composed wholly of members of the Zionist church, but not all Jews by any means are church-men. It is also to be distinguished from the ancient Jewish Symarium or San Hedrin which was the supreme judicial and administrative authority during the reign of the Roman Herod, when Christ was crucified. It was composed of their "Chief Priests, rulers, scribes, and Elders." and was at that time the supreme judicial and political Jewish authority. A recent convention of the "Zionist Congress" was held in Zurich, Switzerland, for the purpose of considering the partition of Palestine, which was attended by 480 delegates, from all countries. It appears from the proceedings of this convention that Professor Chaim Weinzmann, formerly of Russia but now of England, was re-elected as president of this international congress; that Rabbi Wise of New York is president of the American branch; that an executive committee of eleven was appointed with full authority to act; that the "Zionist General Council" was increased from 54 to 70, the additional members being appointed by the convention. It appears also from the proceedings of this convention that it defined the poli-cy of the Zionist Church toward the partition of Palestine, subject to the ap-proval of the "Council of the Jewish Agency" the final authority—the present "Learned Elders of Zion," the secret three hundred, the "Hidden Hand." It appears also that the Royal Commission of the British Government made its report regarding the partition of Palestine to Lord Rothschild as a member of the "Council of the Jewish Agency" and not to Professor Weinzmann as the head of the "Zionist Congress." It appears also that the reason therefore is the fact that the "Council of the Jewish Agency" is the authorized agency of the Jewish race—sectarian and non-sectarian. Thus the supreme authority of this "Jewish Agency" is officially recognized by both the British Government and the Zionist Congress, although the latter is composed of regularly elected delegates from all countries of the world. What is it? Who are its present members? By what authority does it act? What are its purposes? And why all of this secrecy, if its purposes are honest and legiti-mate? We cannot know much about this order because of its secret character and its secret methods. We know that Lord Rothschild was until his recent death a member of it, and that Lord Melchett of England is now said to be its chair-man. We may assume that the Rothschild family has dominated it since the time of Amschel Rothschild. It is the government of the financial power of the Jewish race that rules the world, including America. It is the cabal of the leading Jewish bankers and politicians who were formerly called the "Elders of Zion" and now the "Council of the Jewish Agency." ...