Faurisson Robert - Is the Diary of Anne Frank geniune ? 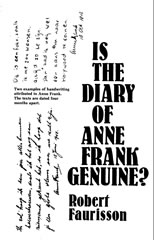 Is The Diary of Anne Frank genuine? For two years that question was included in the official syllabus "Text and Document Criticism," a seminar reserved for degreed students in their fourth year. The conclusion of my studies and research is that The Diary of Anne Frank is a fraud. In order to study the question posed and to find an answer to it, I have carried out the following investigations: 1. Internal criticism: the very text of the Diary (in Dutch) contains a number of unlikely or inconceivable facts. 2. A study of the premises in Amsterdam: on the one hand, the physical impossibilities and, on the other hand, the explanations made up by Anne Frank's father severely compromise him. 3. Interview of the principal witness: Mr. Otto Frank. 4. Bibliographical examination: some curious silences and revelations. 5. A return to Amsterdam for a new investigation: the witnesses turn out to be unfavorable to Mr. Frank; the probable truth. 6. The "betrayer" and the person who arrested the Franks: why has Mr. Frank wished to assure them such anonymity? 7. Comparison between the Dutch and German texts: attempting to make too much of it, Mr. Frank has given himself away; he has signed a literary fraud. ...