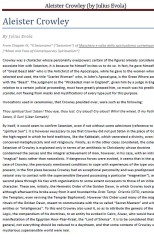 Crowley was a character whose personality overpowers certain of the figures already considered. If we associate him with Satanism, it is because he himself invites us to do so. In fact, he gave himself the title of “Great Beast 666” who is the Antichrist of the Apocalypse, while he gave to the women whom he selected and used, the title “Scarlet Woman” who, in John’s Apocalypse, is the Great Whore associated with the “Beast”. The judgment as the “Wickedest man in England”, given him by a judge in England in relation to a certain judicial proceeding, must have greatly pleased him, so much was his predilection for scandal, not fleeing from masks and mystifications of every type just for this purpose. Invocations used in ceremonies, that Crowley presided over, were such as the following: Thou spiritual Sun! Satan! Thou eye, thou lust. Cry aloud! Cry aloud! Whirl the wheel, O my Father, O Satan, O Sun! (Liber Samekh) By itself, it would seem to confirm Satanism, even if not without some admixture (reference to the “spiritual Sun”). It is however necessary to see that Crowley did not put Satan in the place of God, given the high regard in which he held traditions, like the Kabbalah, which venerated a divinity, even if conceived metaphysically and not religiously. Finally, as in the other cases considered, the ostentatious Satanism of Crowley is explained only in terms of an antithesis to Christianity whose doctrine condemned the senses and the integral achievement of man, however, in his case, with an initiatic and “magical” basis rather than naturalistic. If dangerous forces were evoked, it seems that in the specific case of Crowley, the previously mentioned conditions to cope with experiences of the type would be present, in the first place because Crowley had an exceptional personality and was predisposed in a natural way to contact with the supersensible (beyond possessing a particular “magnetism”), and in the second place through his ties with organizations to some extent successors to those of an initiatic character. These are, initially, the Hermetic Order of the Golden Dawn, in which Crowley took part, although afterward he broke away from it and founded the Ordo Tempi Orientis (OTO, reminiscent of the Templars, even reviving the Templar Baphomet). However this Order used many of the magical rituals of the Golden Dawn, meant to communicate with the so called “Secret Masters” and with given entities or “intelligences”. To this end Crowley also used it, so as to attribute the genesis of the Liber Legis, the compendium of his doctrines, to an entity he evoked in Cairo, Aiwaz, who would have been a manifestation of the Egyptian Hoor‐Paar‐Kraat, the “Lord of Silence”. It is to be considered that, in general, not everything should be reduced to a daydream, and that some contacts of Crowley with a mysterious supersensible world were real. ...