Evola Julius - Meditation on the Peaks 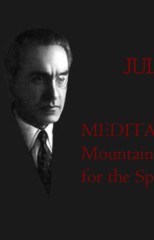 The Mountain and Spirituality. ln the modem world there are two factors that, more than any others, are responsible for hindering ourrealization of the spirituality that was known in the most ancient traditions: the :first is the abstract character of our culture; the second is the glorification of a blind and frantic obsession with activity. On one band, there are people who identify the "spirit" with the erudition acquired in libraries and university classrooms, or with the intellectual garn es played by philosophers, or with literary or pseudomystical aestheticism. On the other band, the new generations have turned athletic competition into a religion and appear to be unable to conceive anything beyond the excitement of training sessions, competitions, and physical achievements; they have truly turned accomplishment in sports into an end in itself and even into an obsession rather than as means to a higher end. Sorne people regard this opposition of lifestyles as sorne k:ind of dilemma. In reality, in the so-called scholarly type, we often find an innate strong dislike for any k:ind of physical discipline; likewise, in many sportspracticing people, the sense of physical strength fosters contempt for th ose in "ivory towers" who confine themselves to books and to battles ofwords they view as harmless. These two lifestyles should be regarded as misguided and as the fruits of modem decadence because they are both foreign to the heroic vision of the spirit that constituted the axis of the best Western classical traditions which, in the contextofthe actualrenovation ofltaly, is being successfully evoked. ...