Evola Julius - Men Among The Ruins 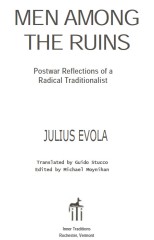 FOREWORD Joscelyn Godwin. Now that we have passed the end of Evola's century, his voice is being heard more widely than it ever was in his lifetime. This is the ninth of his books to appear in English translation; many more have appeared in French and German, while in Italy even his innumerable journalistic writings are seeing the light again, and several periodicals are dedicated solely to his ideas. This revival of an obscure Italian thinker is a remarkable phenomenon. At the present rate, it will not be long before Evola begins to receive the tribute of doctoral dissertations, scholarly articles, and academic conferences, prior to being established in whatever place is eventually accorded to him in the history of ideas. But two things will always act like gravel in the cogs of the academic machine, which is usually able to reduce any historical subject to a pure and emotionally anodyne state. The present publication is an attempt to deal with, though not to remove, one of these obstacles. Evola is a rare example of universality in an age of specialization. He was universal not only in the horizontal domain, as philosopher, engineering student, artillery officer, Dadaist poet and painter, journalist, alpinist, scholar, linguist, Orientalist, and political commentator—not a bad record of achievement before his fiftieth year—but in the vertical dimension as well. It is this vertical dimension that constitutes one of the obstacles to the modern, agnostic approach, but which from Evola's own standpoint gave sense and value to what otherwise might appear as the thinly spread talents of a "renaissance man" or dilettante. One might call it a spiritual dimension, if that adjective were not so exhausted and if it did not carry connotations of a religiosity that Evola despised. His was not the spirituality of piety and mysticism, but the aspiration to what he understood to be the highest calling of man: the identity of Self and Absolute. His route to it led initially not through religion (he soon discarded his strict Catholic upbringing), but through philosophy, not just book-learned but also lived with a white-hot intensity comparable to that which left Nietzsche a burnt-out wreck. Soon after this, Evola plunged into a particularly esoteric form of occultism, again not of the literary or armchair type, but one that entailed trials, asceticisms, and a mastery of terrors that most of us can barely imagine. As a consequence, his character and ideals were fully formed before he was out of his twenties, and he remained true to them for the rest of his life. All that changed was a gradual refinement and a tireless filling-in of the steps on the ladder, from the heights of the Absolute (so beautifully expressed in The Doctrine of Awakening, Evola's book on Buddhism) down through the mysterious intermediate realms treated in his essays "Magic as a Science of the Self," to the dirty world of politics, where Evola the journalist, as a fearless critic of the Fascist regime, seemed to lead a charmed life. This brings us to the second and far more serious obstacle to the appreciation of Evola's thought in a social-democratic society: his extreme right-wing views. One might argue that his reputation would be best served by suppressing them, and especially by not publishing the present work in which they are given such blatant form. Men among the Ruins is, by any standard, far from being Evola's best work, and it should never be the gateway to his thought: that function belongs to his masterwork, Revolt Against the Modern World. However, if Evola is to be studied and understood even by those—and this is increasingly the case in the United States—who cannot read him in the original language, it is academically dishonest to suppress anything. ...