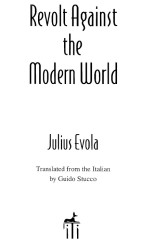 Julius Evola (1898-1974) is still relatively unknown to the English-speaking world, even in the Lraditional circles surrounding René Guénon, of whom he was his leading Italian representative. The major reason for this is that unlil recent! y little of Evola's work had be en translated into English. This situation is being remedied by Ehud Sperling, president of Inner Traditions International. In addition to Eros and the Mystenes of Love: The Metaphysics of Sex pub!ished in 1983, Inner Traditions bas also brought out two of Evola 's most important books, The Yoga of Power, on Tantrism, and The Hem1etic Tradition, on alchemy. Following Revoit Against the Modem World, Inner Traditions will also republish Evola 's masterful work on Buddhist asceticism, The DoctJine of Awakening. ...