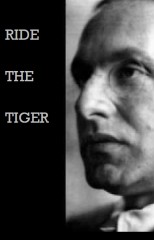 The Modern World and Traditional Man. This book sets out to study some οί the ways ίη which the present age appears essentially as an age οί dissolution. At the same time, it addresses the questioR οί what kind οί conduct and what form οί existence are appropriate under the circumstances for α particular human type. This restriction must be kept ίη mind. What Ι am about to say does not concern the ordinary man οί our day. Οη the contrary, Ι have ίη mind the man who finds himself involved ίη today's world, even at its most problematic and paroxysmal points; yet he does not belong inwardly to such a world, nor will he give ίη to it. He feels himself, ίη essence, as belonging to a different race from that οί the overwhelming majority οί his contemporaries. The natural place for such a man, the land ίη which he would not be a stranger, is the world οί Tradition. Ι use the word tradition ίη a special sense, which Ι have defined elsewhere.1 It differs from the common usage, but is close to the meaning given to it by Rene Guenon ίη his analysis οί the crisis οί the modern world.2 lη this particular meaning, a civilization or a society is "traditional" when it is ruled by principles that transcend what is merely human and individual, and when all its sectors are formed and ordered from above, and directed to what is above. Beyond the variety οί historical forms, there has existed an essentially identical and constant world οί Tradition. Ι have sought elsewhere to define its values and main categories, which are the basis for any civilization, society, or ordering οί existence that calls itself normal ίη a higher sense, and is endowed with real significance. ...