Evola Julius - The Mystery of the Grail 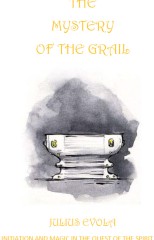 Author : Evola Julius (Giulio Cesare Evola)
Title : The Mystery of the Grail Initiation and Magic in the Quest for the Spirit
Year : 1937

Foreword by H. T. Hansen. The original version of Julius Evola's Mystery of the Grail formed an appendix to the first edition of his masterpiece, Rivolta contra il mondo moderno (1934). Three years later he reworked that appendix into the present book, which first appeared as part of a series of religious and esoteric studies published by the renowned Laterza Publishers in Bari, Italy, whose list included works by Sigmund Freud, Richard Wilhelm, and C. G. Jung, among others. ...