Evola Julius - The Tragedy of the Romanian 'Iron Guard' Codreanu 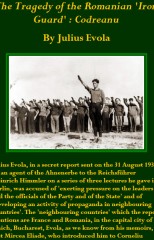 Julius Evola, in a secret report sent on the 31 August 1938 by an agent of the Ahnenerbe to the Reichsführer Heinrich Himmler on a series of three lectures he gave in Berlin, was accused of 'exerting pressure on the leaders and the officials of the Party and of the State' and of 'developing an activity of propaganda in neighbouring countries'. The 'neighbouring countries' which the report mentions are France and Romania, in the capital city of which, Bucharest, Evola, as we know from his memoirs, met Mircea Eliade, who introduced him to Corneliu Codreanu, the leader of the Iron Guard, a member of which Eliade then was. This meeting is described in 'Colloquio col Capo delle 'Guardie di Ferro' ('Conversation with the Leader of the 'Iron Guards''), published in Regime Fascista on the 22 March 1938, as well as in four other articles which appeared the same year in various other Italian papers ; 'La Tragedia della 'Guardia di Ferro' Romena', itself, appeared in Roma (Frenchspeaking readers will be particularly interested to know that, in the French translation of this article, published in the French paper Totalité in 1984, some passages related to Codreanu's views on Jews were cut). The one who was called by Adolf Hitler 'the father of European nationalism' made such a great impression on Julius Evola that he evoked him again in 'Il Cammino del Cinabro' (Scheiwiller, Milano, 1963, pp 151-152) and in 'Il Fascismo visto della Destra' ('Fascism seen from the Right'), (Volpe, Roma, 1964, p.32). This meeting took place at Codreanu's headquarters, the 'Green House', the Iron Guard's first 'nest', a few months before he was assassinated, along with thirty of his comrades, in the forest of Tancabesti by henchmen of the political schemers who were in office in Bucharest at that time. ...