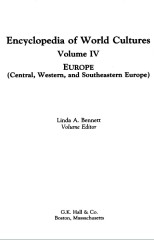 Europe is in tremendous flux. Political boundaries and designations are changing with dizzying speed. Population mobility is altering the human landscape in astonishing and unpredictable ways. To publish this volume on European cultures at this particular historical juncture provides both a wonderful opportunity to offer a much-needed resource to help interpret these phenomenal changes as well as an awesome challenge to include information that is as up-to-date as possible. The volume covers 116 cultures of western, northern, central, Mediterranean, and southeastern Europe. Also included here are island cultures in the Mediterranean Sea and the Atlantic Ocean that traditionally have been affiliated sociopolitically with mainland European cultures. The locations of many of these cultures are shown on maps 2-4. Not included in this volume are cultures in North Africa, mainland Turkey, or within the former Soviet Union. The cultures in the European section of the former Soviet Union, such as Estonia, Georgia, and Ukraine, are covered in volume 6. ...