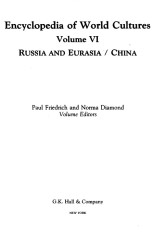 The territory of Northern Eurasia (roughly Macro-Russia, the Commonwealth of Independent States 1CIS1, or the former USSR) covers more than one-sixth of the earth's land surface. Much of it is blanketed by seemingly endless forest. It is inhabited by people speaking over one hundred languages and constitutes the third most populous geopolitical entity in the world. It extends from the Arctic Sea to the deserts of Turkestan and includes maximum and minimum degrees of temperature, elevation, precipitation, wind, land and mineral resources, and ecological, cultural, and linguistic variation. The cultures of this huge area may be divided roughly into four parts that overlap-for example, the Jews and Gypsies, each with significant subcultural variation, range from the Baltic Sea to the Pacific Ocean. The four major culture areas are: European Russia, with its Slavic, particularly Great Russian, majority and many Tatar and Uralic minorities; Central Asia, with its predominantly Turkic, Muslim peoples, notably the Kazakhs and the Uzbeks, spread over vast steppes and desert ranges; Siberia, with its many small indigenous groups such as the northernmost Nganasan and a huge Russian (Siberiaki) majority mainly in the cities from the Urals to Vladivostok; and the Caucasus, where the density and multiplicity of cultures (e.g., Daghestan is known as "the Mountain of Languages") coexists with many shared patterns and traits. ...