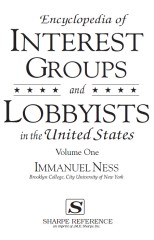 Interest groups and lobbyists play a central role in the American political system. With thousands of staffers and hundreds of millions of dollars at their command, these groups and individuals influence elections, shape government agendas, and help draft legislation. Some interest groups represent huge industries or people in a specific field or business; others are labor unions representing workers in particular trades. Still other interest groups are devoted to a single issue or cause. Interest groups represent both small and large constituencies and help to educate the public on many issues. While interest groups engage in numerous, diverse activities—from public relations to providing industry databases for members—their political functions essentially include one or both of the following: donating money to candidates’ campaigns, and hiring lobbyists to influence the course of legislation of concern to the members of the interest group. Lobbyists, who are either on the payroll of a given interest group or who work for a professional lobbying firm, then try to educate lawmakers to the views of the interest group the lobbyists represent. Often, lobbyists’ efforts go beyond education to applying pressure on legislators through public relations and advertising campaigns, such as the (in)famous “Harry and Louise” ads that sunk President Bill Clinton’s universal healthcare insurance plan in 1994. Whatever their many functions, interest groups have become so ubiquitous that it is impossible to understand modern American politics without understanding the enormous power these groups wield in shaping the national political debate. The phenomenon of interest group politics is nothing new. In the 1830s, the great French political theorist Alexis de Tocqueville noted the propensity of Americans to form associations to effect social, political, and economic change. Such groups included abolitionists, who fought to end slavery, as well as other groups who sought to outlaw dueling, capital punishment, and the consumption of alcohol. The growth of the federal government in the twentieth century, however, sparked the rise of modern, Washington-based interest groups. Progressive Era legislation in the early 1900s and the New Deal in the 1930s created new regulatory agencies that expanded the federal bureaucracy and spurred development of business-oriented interest groups. The ferment of the 1960s led to broader social programs and triggered the formation of numerous groups dedicated to environmental, civil rights, humanitarian, educational, and economic goals. These various groups supported candidates, advocated specific laws and regulations, and pressured members of Congress and government officials to pass them. ...