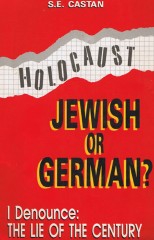 OVERTURE. For forty years knowing a lot of what Castan presents in his documentary, I thought I was going to die without seeing/listening Germans tell their version for the second world war. And then finally a Brazilian does it, which made me very happy. ln my opinion this book's central stand is that of presenting the German side of what went on in the second world war. For a Western world where · only the version of defenders of Zionism has circulated for 43 years and the worst atrocities are traced to the Germans, the task of Zionists has had the benefit of the astounding silence on the matter, by the German side and also by those who, not being German or Jewish, have kept practically mum. The tact is that the youth everywhere in the Western world has been gypped not just by plain lies of propaganda but also by the impossibility that, by a mere matter of elementary justice, it would have knowledge of both sides so then it would be able to make up its opinion, using its intelligence, realism, sanity and justice. Castan does that - he offers his documentary, after examining which the sincere, honest, lucid reader, who wants to know what is really going on and has gone on in our recent world, may make up his opinion. There is no shame in making up one's opinion when one has been led along to do it by just one side of the coin. Shameful may be to stick to an injust and one-sided opinion when the other side's stand finally appears. A mere matter of justice and in defining justice we can say it is a matter of lucidness, reliable information, knowledge of real tacts- and so justice can appear efficient, operative, useful and better than that- indispensable. We are in a world of tumult, each faction supposing itself the absolutely and divinely right one, supported on tacts that are selected, manicured, implanted on masses (even those who think of themselves as well-informed) by mechanisms that control the public opinion. That in Brazil, only? Not at ali, it happens in Europe, Asia, America an Africa. There are mechanisms/institutions living off that fat - informing and misinforming, enlightening but leading matters to their side. We always find those who feel themselves "the righter, more correct, juster ones". When does the human being plan to put an end to this stupid and suicidai game? How many peoples that under ali lights should be brotherly, will go on acting like those small ltalian feuds engaged in hand-to-hand knifing, devouring each other, in regional and stupid political fights? We are on the threshold of the Age of Information, when the matter printed and divulged by the other media is making up, among them, a mass of vidiots. lt is only the beginning, because books, informative material in general, have grown so capable to change/inform human beings they have rendered INEVITABLE the REVOLUTION OF KNOWLEDGE AND OPINION of most peo·ples in our world. The book by S.E Castan fills those requirements and works along that direction. One more reason why it deserves acceptance, calm and just examination, decent and clean treatment. lt can change your lie. making you see how easily whole peoples may be deceived, for how long ... and by whom ... Alf Eyre. ...