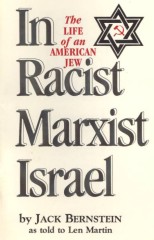 ...Judaism is a religion; but Zionism is a political movement started mainly by East European (Ashkenazi) Jews who for centuries have been the main force behind communism/socialism. The ultimate goal of the Zionists is oneworld government under the control of the Zionists and the Zionist-oriented Jewish international bankers. In Germany, the average Jews were victims of the Zionist elite who worked hand in hand with the Nazis. Many of those same Zionist Jews who, in Germany, had worked with the Nazis, came to Israel and joined hands with the Zionist/Communist Jews from Poland and Russia. It is the two faces of communism and Nazi-style fascism that rule Israel. Democracy is merely an illusion. ...