Brenner Lenni - Zionism in the Age of the Dictators 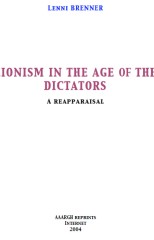 Author : Brenner Lenni
Title : Zionism in the Age of the Dictators
Year : 1983

Why another book on the Second World War, which is probably the most written about subject in human history? Why another book on the Holocaust, which has been movingly described by many survivors and scholars? As a general subject, the age of the dictators, the world war, and the Holocaust have indeed been covered — but has the interaction between Zionism and Fascism and Nazism been adequately explored? And if not, why not? The answer is quite simple. Different aspects of the general subject have been dealt with, but there is no equivalent of the present work, one that attempts to present an overview of the movement’s world activities during that epoch. Of course, that is not an accident, but rather a sign that there is much that is politically embarrassing to be found in that record. Dealing with the issues brings difficult problems, one of the most difficult arising out of the emotions evoked by the Holocaust. Can there by any doubt that many of the United Nations delegates who voted for the creation of an Israeli state, in 1947, were motivated by a desire to somehow compensate the surviving Jews for the Holocaust? They, and many of Israel's other well-wishers, cathected the state with the powerful human feelings they had toward the victims of Hitler’s monstrous crimes. But therein was their error: they based their support for Israel and Zionism on what Hitler had done to the Jews, rather than on what the Zionists had done for the Jews. To say that such an approach is intellectually and politically impermissable does not denigrate the deep feelings produced by the Holocaust. Zionism, however, is an ideology, and its chronicles are to be examined with the same critical eye that readers should bring to the history of any political tendency. Zionism is not now, nor was it ever, co-extensive with either Judaism or the Jewish people. The vast majority of Hitler's Jewish victims were not Zionists. It is equally true, as readers are invited to see for themselves, that the majority of the Jews of Poland, in particular, had repudiated Zionism on the eve of the Holocaust, that they abhored the politics of Menachem Begin, in September 1939, one of the leaders of the self-styled 'Zionist-Revisionist' movement in the Polish capital. As an anti-Zionist Jew, the author is inured to the charge that anti-Zionism is equivalent to anti-Semitism and 'Jewish self-hatred. ...