Butz Arthur Robert - The hoax of the twentieth century 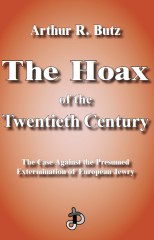 Author : Butz Arthur Robert
Title : The hoax of the twentieth century The Case Against the Presumed Extermination of European Jewry
Year : 1976

The Author. Arthur R. Butz was born and raised in New York City. He received his B.S. and M.S. degrees in Electrical Engineering from M.I.T. and his Ph.D. in Control Sciences from the University of Minnesota in 1965. In 1966 he joined the faculty of Northwestern University, Evanston, Illinois, where he is now Associate Professor of Electrical Engineering and Computer Sciences. Dr. Butz is the author of numerous technical papers. Foreword to the 2003 Edition. My investigations of the Jewish “Holocaust” commenced in 1972, and twenty seven years have passed since the first publication of this book in 1976 in England as The Hoax of the Twentieth Century. Twenty six years have passed since the release of the slightly revised second British and first American edition of 1977. This text consists of the last, preceded by a short article I wrote for the student newspaper at Northwestern University in 19911 and followed by five supplements representing writings from 1979-1997. There is also an addendum to Appendix E (“The Role of the Vatican“), consisting of the obituary/tribute I wrote on Rev. Robert A. Graham. All were published in the Journal of Historical Review. Also Appendix A on Kurt Gerstein, has been revised somewhat. I am proud that this book remains of interest to anybody a quarter century after publication. Nevertheless, the age of this text, and the great advances that have subsequently occurred in Holocaust revisionism, require some comments on the value of the book to today’s reader. How can a quarter century old text not be obsolete today? What does today’s reader gain from it? Would it not be better to revise this text to take into account more recent developments? From the perspective of today, the book has defects, and several people, of whom I am one, could now do better. In admitting such defects, I can plead that I was one man working with little help. Except for Wilhelm Stäglich, the correspondents I had before publication in 1976 were not then, and have not subsequently become, significant in revisionist work. The literature of revisionist orientation was scanty. Some of it was rubbish that constituted a minor nuisance. On the positive side were Paul Rassinier, Thies Christophersen, and Wilhelm Stäglich. At that time the writings of Rassinier, a former political prisoner at Buchenwald, were of interest both as a primary source, relating personal experiences, and as historical exposition (today Rassinier is of interest only as a primary source). Christophersen and Stäglich, Germans who had been stationed near Auschwitz, were of value only as primary sources, although Stäglich later wrote a book of historical exposition. Even taking these three into account, the historical complex was not there, as I shall explain below. ...