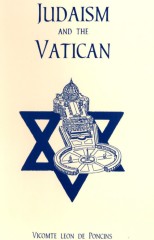 VICOMTE LEON DE PONCINS is descended from an old and distinguished French family, having a long tradition in the study of spiritual and political subversion. His paternal great grand-father was killed fighting against the 1789 Revolution, and his maternai great grand-father was imprisoned by Napoleon for his support of the monarchy. The author himself, while refraining from aU direct contact with political activity, has written nearly twenty books dealing with specifie aspects of the problem of subversion in the modern world, and outside France, his works have been published in England, Germany, ltaly, Spain, Brazil, Hungary, Bulgaria and Portugal. Before the last war, he founded and directed the famous review Contre-Révolution, which was published from Geneva in Switzerland. During the Second World War he was enlisted in French Military Intelligence in which he served until the Liberation. Later the Liberation Authorities brought an unsuccessful prosecution against him for alleged treason in respect of sorne of his writings but it was found that he had merely published texts by eminent Jewish scholars, the authenticity of which were incontestable. Of all who have attacked the problem of political and spiritual subversion in the modern world, none has won more universal acclaim by his penetrating logic and strict impartiality than Vicomte de Poncins. ...