De Poncins Léon - The problem with the jews at the council 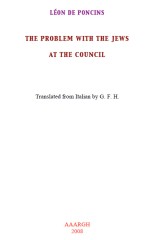 Author : De Poncins Léon
Title : The problem with the jews at the council
Year : 1965

One of the most disruptive changes in Catholic doctrine introduced by Vatican II is certainly the Church’s teaching about the Jewish people. Up to forty years ago, in fact, all theologians, relying firmly on the Gospels, on the Fathers of the Church and on the ecclesiastical Magisterium of nearly 2,000 years believed that with the coming of Jesus Christ and the advent of the New Covenant sealed with His Blood, the New Israel of God is no longer the people of the Old Covenant, but all men called to be part of the Catholic Church through Baptism. It was also common opinion that the Jewish contemporaries of the Savior and those who lived subsequently (insofar as they “shared in” their forefathers’ “crucifixion”) were deicides, or that they were stained with the worst crime: the murder of the Son of God and the rejection of His messiahship and divinity. That was what all Catholics believed at least until 1965, when with the approval of the council’s document Nostra Ætate a new doctrine was introduced according to which the Jews were in fact not responsible for the death of Jesus (unjustly attributed to the Romans, simple material executors of the crucifixion), and therefore had no longer to be considered as cursed by God for their enormous sin. Continuing along this line of thought and action one went even further and proclaimed that the Old Covenant between God and his people was still in force,1 and thus maintained in fact that God had not rejected Israel because of its refusal of Christ and the salvation offered by Redemption which he accomplished on Calvary2; that anti-Semitism was a sentiment fed in the population from pre-council Christian teaching,3 and that such a sentiment had led to the fierce persecution of Jews put into action by Nazism and in the Holocaust, for which, therefore, the Church would be responsible. And thus it is that the highest representatives of the Bride of Christ, without blemish and without sin, prostrated themselves and asked forgiveness of Caiaphas’ successors for the crime committed by “Christian peoples” (!?), fomented in their hatred toward the Jews by a “distorted” reading of the Evangelists and by the excessive enthusiasm of some Christian orators of the first centuries. In fact, this council document—one must read it to believe it—is not equipped with any notes, and that is because this far-fetched thesis, imposed on the faithful of the whole Catholic world, rests on nothing! Not a single passage of Holy Scripture, not a single saint, not a single Pope—at least until 1962—has ever supported a similar theory. On the contrary, as results from a reading of this simple essay, all the Saints, all the Fathers of the Church and all the Popes have strongly reaffirmed the traditional doctrine. Nevertheless, except for a few voices out of the “politically incorrect” chorus which were hence immediately silenced, the Christian people, slowly poisoned with other new doctrines brought forth by the Council (Ecumenism, religious freedom, etc....), have passively accepted this diktat and have aligned themselves with the novelty. Notwithstanding every human calculation, every willingness to compromise and every plan for peace on earth, we believe that every betrayal of the Evangelical truth is a betrayal of the faith which we have received in baptism and which we want to keep intact until our death, even if this should entail the misunderstanding of our brothers and even persecution on the part of some of them, since we are certain that soon the Lord will restore the truth in its fullness. ...