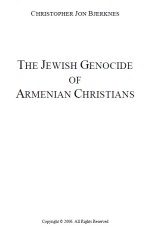 PREHISTORY OF THE 1915 GENOCIDE. In conformity with the Jewish plans revealed in The Protocols of the Learned Elders of Zion in 1905, Jewish leaders met in Masonic lodges in Salonika, Paris and Vienna, and plotted a coup d’état against the Sultan of Turkey Abdul Hamid II. Jews and crypto-Jewish Dönmeh of the Committee for Union and Progress took control of the Turkish Empire in 1909. They had several goals. Their primary objective was to establish a segregated “Jewish State” in Palestine. They also sought to instigate World War I, to slaughter entire Christian populations, and to destroy the Turkish Empire and supplant Islamic religion and culture with a soulless and cultureless society engineered by Jewish positivists in Vienna, Paris and Salonika. ...