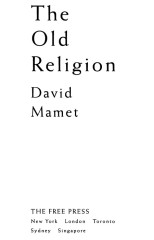 ln 1915 a young factory girl was killed in Atlanta, Georgia. Her name was Mary Phagan, and she worked at the National Pencil Factory. The factory manager was Leo Frank. He was a New York )ew. Frank was accused of the crime and brought to trial. Preparing for the trip to Morris's house The newspaper lined a bandbox. He opened the bandbox to get a fresh shirt collar. He wondered, as he often did, at the appearance of the newspaper. It had been glued into the sides and bottom of the box, and the date showed April 10, 1868. But the newsprint had not yellowed. "Obviously the glue is a preservative;' he thought. "We might think what there is in the glue to preserve the clarity, and, so, arrive at a new process, or, at a new application of an existing operation to lengthen the life of newsprint:' He smiled. "But is not longevity in opposition to its very nature, which is temporareity? And if we had begun with newsprint which resisted time, would it not be an advancement if, by extraction of the preservative glue, the cost or difficulty of manufacture could decrease? If sorne man;' he thought, "recognized one day it was not necessary for the print to retain clarity beyond the one day, and, so doing, reformed the industry ... ? "Yes;' he thought. "Yes. You could take it either the one way or the other. And either would be as astoundm. g." The newsprint advertised, along the fold where the box's sides and bottom met, a meeting to petition Isabella, the queen of Spain, for the release of Edgardo Mortara. "Restore the Child to its Rightful Parents ... ," the print read. It was a sheet of the Brooklyn Eagle) and had been glued into the box by someone in his wife's family, back in those days. Edgardo Mortara was a Jewish child. He'd fallen ill and was believed near death. One day, in his parents' absence, his Catholic nurse took him from the house and had him baptized, to save his soul. The child was kidnapped by the state-taken from his parents' home. No diplomatie or religious pressure was sufficient to induce the government of Spain or the Catholic church to give the child back. Frank looked clown at the clipping and thought of the discussions, the endless and not unenjoyable discussions, he and his fellow Jews had had about the outrage. The bandbox held his collars and, in a soft morocco purse, his cailar studs. He fitted the cailar into his dean shirt and stepped to the rnirror to tie his tie. "Yes, you look nice;' his wife said. He nodded, and they continued to prepare for the ritual trip to Morris's house. ...