Dilling Elizabeth - The Plot Against Christianity 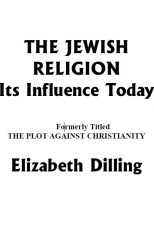 Foreword. Elizabeth Dilling Stokes was born, raised, and educated in Chicago. After attending the University of Chicago she married, and for many years devoted her life to her children, social activities on the North Shore of Chicago, and being a concert harpist. After hearing of the great "humanitarian experiment" in Soviet Russia, she traveled there in 1931, and was able to go behind the scenes. She was shocked at the forced labor, the squalid living quarters, and deplorable living conditions, and the atmosphere of fear created by the Soviet dictatorship. She was most shocked by the virulent anti-Christianity of the atheist Communist regime. Following her return to the United States she lectured and wrote about what she had seen, realizing from the opposition which immediately arose that a substantial Marxist movement was active in the United States. In 1934 her first book The Red Network was published, and exposé of the persons and organizations furthering Red causes in the United States. In 1936, her second book, The Roosevelt Red Record and Its Background, was published. Almost immediately after these books were published, she was attacked as "anti-semitic," although she had actually offered her anti-Communist services to Jewish organizations, and knew nothing of organized Jewish involvement in the Marxist movement. After researching and studying, however, in 1940 she published her third book The Octopus, which dealt with these subjects. After World War II commenced, Mrs. Dilling became convinced that, despite President Roosevelt's protestations that not one American boy would ever again fight on foreign soil, there was a movement afoot to involve the United States, with the result that a substantial part of the world would be communized later. In 1941, she led a Mother's March on Washington to oppose the "Lend Lease" bill, proclaimed to help keep us out of war by its sponsors, but proving the last step for our involvement. The bill passed by only one vote. A few months later, the United States went to war. In 1944, Mrs. Dilling's views involved her in the now infamous mass "sedition" trial. The case was ultimately dismissed by a Federal Court as "a travesty on justice." She was later remarried to Jeremiah Stokes, a Christian anti-Communist writer, and she continued to write and lecture in behalf of Christianity and Constitutional Americanism, first publishing this book in 1964. Mrs. Dilling Stokes died in 1966 at the age of 72. ...