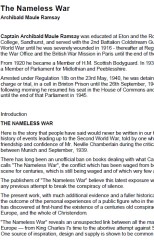 Captain Archibald Maule Ramsay was educated at Eton and the Royal Military College, Sandhurst, and served with the 2nd Battalion Coldstream Guards in the First World War until he was severely wounded in 1916 - thereafter at Regimental H.Q. and the War Office and the British War Mission in Paris until the end of the war. From 1920 he became a Member of H.M. Scottish Bodyguard. In 1931 he was elected a Member of Parliament for Midlothian and Peeblesshire. Arrested under Regulation 18b on the 23rd May, 1940, he was detained, without charge or trial, in a cell in Brixton Prison until the 26th September, 1944. On the following morning he resumed his seat in the House of Commons and remained there until the end of that Parliament in 1945. ...