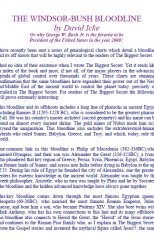 Author : Icke David
Title : The Windsor-Bush Bloodline. Or why George W. Bush Jr. is the favorite to be President of the United States in the year 2000!
Year : 199*

I have recently been sent a series of genealogical charts which detail a bloodline and its off shoots that will be highly relevant to the readers of The Biggest Secret. I had no idea of their existence when I wrote The Biggest Secret. Yet it reads like an index of the book and most, if not all, of the major players in the advancing agenda of global control over thousands of years. These charts are stunning confirmation that the same bloodlines have expanded their power out of the Near and Middle East of the ancient world to control the planet today, precisely as detailed in The Biggest Secret. For readers of The Biggest Secret the following will prove extremely interesting: This bloodline and its offshoots includes a long line of pharaohs in ancient Egypt, including Ramses II (1295-1228 BC), who is considered to be the greatest pharaoh of all. He was his country's master architect (sacred geometry) and his name can be found on almost every ancient shrine. The gold mines of Nubia made him rich beyond the imagination. This bloodline also includes the extraterrestrial-human hybrids who ruled Sumer, Babylon, Greece, and Troy, and which, today, rule the world. One common link in this bloodline is Philip of Macedonia (382-336BC),who married Olympias, and their son was Alexander the Great (356-323BC), a tyrant who plundered that key region of Greece, Persia, Syria, Phoenicia, Egypt, Babylon, the former lands of Sumer, and across into India before dying in Babylon at the age of 33. During his rule of Egypt he founded the city of Alexandria, one the greatest centers for esoteric knowledge in the ancient world. Alexander was taught by the Greek philosopher, Aristotle, who in turn was taught by Plato and he by Socrates. The bloodline and the hidden advanced knowledge have always gone together. ...