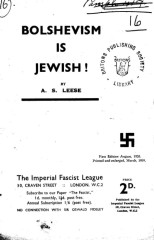 THE object of this pamphlet is to prove that Bolshevism is Jewish. Bolshevism represents one of the final stages in the deliberate Jewish programme for World Domination. It is not in the scope of this pamphlet to describe the earlier stages of the programme, in which Liberalism, Masonry and Marxism prepared the ground for Bolshevism; that part of the subject is dealt with in our pamphlet, “The Era of Democracy: the Era of World Ruin,” price 2½d, post free. BOLSHEVISM IS NOT COMMUNISM. Communism is not Bolshevism. In Bolshevik Russia, there is no common ownership of land, goods and money; nor is there equal pay for all. These two utterly impracticable ideals have, under the name Communism, been the means through which the Russian people have been duped into accepting something quite different, i.e., Bolshevism. Then what is Bolshevism? It is State Capitalism, run by Jews in the Jewish interests. The Jews being a non-creative and unproductive nation have failed utterly in the grand farce of the Five-Year-Plan, because it was never in them to create but only to exploit what has been created by the work of others; in this case, they tried to create, and of course, failed. The seemingly strange predilection for Bolshevism which is noticeable in unexpected places in Britain to-day, is explained at once when it is realised that Bolshevism is a Jewish weapon; for the idea of Communism which prepares the “underdog” for Bolshevism, is backed by the Jewish Money Power itself, the existence of which as a political power is now becoming known even to the most unsuspecting Briton. THE ALLIANCE OF JEWISH FINANCE AND BOLSHEVISM. In exposing this alliance, we will quote the Jew Disraeli, in his work of history, “The Life of Lord George Bentinck,” written in 1852, at a time when revolutionary upheavals were convulsing Europe. “The influence of the Jews,” he writes, “may be traced in the last outbreak of the destructive principle in Europe. An insurrection takes place against tradition and aristocracy, against religion and property. Destruction of the Semitic principle, extirpation of the Jewish religion, whether in the Mosaic or the Christian form, the natural equality of men and the abrogation of property are proclaimed by the Secret Societies which form Provisional Governments, and men of Jewish Race are found at the head of every one of them. The people of God co-operate with atheists; the most skilful accumulators of property ally themselves with Communists; the peculiar and chosen Race touch the hand of all the scum and low castes of Europe; and all this because they wish to destroy that ungrateful Christendom which owes to them even its name, and whose tyranny they can no longer endure.” Surely, no higher authority is possible; what was true in 1852 is true to-day. WHY RUSSIA WAS CHOSEN. The first victim was Russia. The reason she was chosen was that she was the only country which defended herself by laws framed to prevent the Jew from contaminating and controlling her. Bolshevism is revenge on the part of the Jewish nation on Russia, actuated by Asiatic hate and tyranny. The Jews chose their ground well. The Slav is by nature not individualistic; he is patient, inured to hardship and fatalistic. He accepted the idea of Communism; and he got the fact of Bolshevism. He accepted the idea of equal wages for all and property held in common; and he got a toll of 20 million lives, double the blood-bill of the Great War, as the price of his own starvation and slavery under Jews. The first direct blow was organised by the Jew Parvus, alias Helphand, in conjunction with the German General Staff; the “Sisson Report,” published by the American Committee on Public Information, 1918, conclusively establishes the connection between the Jew Bankers of Germany and the financing of Lenin and Trotsky for the Revolution. Among other items printed in documents published by the U.S.A. Government, is the following letter: — Stockholm, 21st Sept., 1917. ...