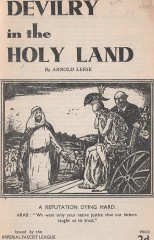 PALESTINE is a country about the size of Wales. lts population before it was singled out to be a Natwnal Home for the Jews, in round figures, consisted of : Muslim Arabs, 500,000. Christian Arabs, 63,000. Jews, 65,000. The number of Jews is now (1938) over 400,000. THE BASIC LIE BEHIND THE JEWISH CLAIM TO PALESTINE. By means of constant propaganda the Jews have induced the Gentile peoples to believe that the Jews have some moral right to occupy Palestine. No such moral right exists. The Jews crept into Palestine by stealth; for only about 350 years in the whole history of the country was it under Jewish control; and the Jews lost it by conquest. Since the Romans came to control the country in A.D. 70, the Jews have never ruled Palestine in any form. They actually have no historical daim to the country at ali. They have generally been an absolute nuisance in it. The Christians have a far better moral daim to Palestine, for there their religion was founded by a Galilean. They have always called it " The Holy Land " and ha-ye waged severa! Crusades to regain it from the Mohammedans, and in these wars thousands of Christians lost their lives. The Founder of their religion was done to dea th there by the jews. There is another point. The Jews who have immigrated into Palestine since the " National Home " was attempted, have been chiefiy Ashkenazim Jews; these are the Jews of Eastern Europe; unlike the Sephardim Jews who are mainly congregated in the countries around the Mediterranean Sea, these Ashkenazim Jews are the descendants, not of Jews who were ever domiciled in Palestine, but of the inhabitants of the Khazar Empire in Southern Russia, which fiourished from the 7th to the roth century, and whose early ruler became "converted" to the religion of the Jews and forced his subjects to do the same. Thus, the Ashkenazim Jews have not even the excuse that their anceStors ever lived in Palestine ! ...