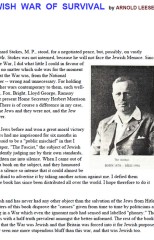 Preface. I stood, as Mr. Richard Stokes, M. P., stood, for a negotiated peace, but, possibly, on vastly different grounds. Mr. Stokes was not interned, because he will not face the Jewish Menace. Since the beginning of the War, I did what little I could in favour of a negotiated peace, no matter which side was for the moment on top. I believe that the War was, from the National standpoint, a disaster -- wrong and unnecessary. For holding similar views on other wars contemporary to them, such wellknown men as: Pitt, Fox, Bright, Lloyd George, Ramsay MacDonald and the present Home Secretary Herbert Morrison were not interned. There is of course a difference in my case, as I am attacking the Jews and they were not, and the Jew holds supreme power. I have attacked the Jews before and won a great moral victory over them. The Jews had me imprisoned for six months in 1936 for what was said to be a "public mischief" in that I mentioned in my paper, "The Fascist," the subject of Jewish Ritual Murder. Evidently judging me by their own standards, they thought to frighten me into silence. When I came out of prison I published a book on the subject, and they honoured me by maintaining a silence so intense that it could almost be heard! They were afraid to advertise it by taking another action against me. I defied them successfully and the book has since been distributed all over the world. I hope therefore to do it successfully again. This War was Jewish and has never had any other object than the salvation of the Jews from Hitler. The first nine chapters of this book disprove the "causes" given from time to time by politicians and others for our being in a War which even the ignorant mob had sensed and labelled "phoney." The Tenth Chapter deals with a half-truth prevalent amongst the better-informed. The rest of the book completes my case that the War was Jewish and that Britain was forced into it for Jewish purposes. The world has only seen one more stupendous bluff than this war, and that was Jewish too. ARNOLD LEESE ...