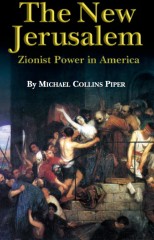 The most thorough, straight-forward, factfilled, comprehensive overview of what is by far the most controversial topic today— a sensitive subject many Americans whisper about, but which people worldwide otherwise openly discuss: Zionist Power in America . . . No, this book is most definitely not “anti-Semitic” nor does it lay forth anything that could even be remotely described as a “conspiracy theory.” Nor is this book the work of “Islamofascists” or “hate-filled extremists.” Quite the contrary! This remarkable volume—prepared by an unswervingly patriotic American who isn’t afraid to say he places America First—is an honest and forthright (even, frankly, admiring and sympathetic) study that encompasses a wide-ranging assembly of material, taken from indisputably “mainstream” sources (most all of them American Jewish authors) who are very pro-Israel. Here, between two covers for the first time ever, lies a vast range of hard data and information relating to the massive accumulation of wealth and power by the primary forces behind the Zionist lobby in America today. This is a truly eye-opening inside look at the entire story in a way it has never been presented any other time by any other writer before. This one-of-a-kind survey doesn’t just focus on the “Israeli lobby” and its impact on U.S. foreign policy. There are lots of books on that subject. Instead, this study examines the incredible array of wealth and clout of the Zionist community, demonstrating—beyond any question—that it undeniably constitutes a very determined “power elite” in the United States today. Included are detailed lists of the most fabulous Zionist fortunes in America. All sources are clearly documented. For the average individual to assemble this information would cost hundreds (if not thousands) of dollars and dozens of hours of research. Many books cited are out of print and very hard to find, but they are “mainstream” authors and sources, and all pro-Zionist in origin. This is an invaluable resource volume to refer to time and again in debating with friend and foe alike, writing letters to the editors of local newspapers, calling radio talk shows and in the course of research. Here are the facts—not the myths—about Zionist power in America . . . ...