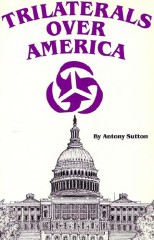 CHAPTER ONE: WHAT IS THE TRILATERAL COMMISSION? The Trilateral Commission was founded in 1973 by New York banker David Rockefeller, then Chairman of Chase Manhattan Bank, and Harvard University academic Zbignieuw Brzezinski, later to become National Security Assistant to President Jimmy Carter. What it is depends on one's viewpoint. According to the Trilateral Commission itself: The Trilateral Commission was formed in 1973 by private citizens of Western Europe, Japan and North America to foster closer cooperation among these three regions on common problems. It seeks to improve public understanding of such problems, to support proposals for handling them jointly, and to nurture habits and practices of working together among these regions. However, in populist political circles the Trilateral Commission is a transparent device to achieve New World Order, which sound suspiciously like other dictatorial "World Orders." From this viewpoint Trilaterals are enemies of freedom and intent on gaining a monopoly of world political power for their own benefit. Twenty years ago the Trilateral Commission had very little history; one could not track its intentions from its actions. Today, in 1994, one can look at 20 years of Trilateral history and more accurately assess their objectives in the light of past political actions and member appointments to various Administrations. The original 1972 membership chosen by Rockefeller and Brzezinski comprised about 200 members worldwide of whom about one-third were North Americans, one-third Europeans and one-third Japanese. In 1993 this had expanded to about 325 members worldwide, termed "distinguished citizens" by the Trilateral Commission but in fact representing an extremely narrow spectrum of world opinion and culture and completely unelected or representative of anything but David Rockefeller's personal views. From the start the Commission has been termed "private" and "unofficial" with the stated objective to "draw together the highest level unofficial group possible to look together at the common problems facing our three areas" and to "foster cooperation." Throughout Trilateral Commission's reporting one finds a consistent confusion between "private" and "public." The Commission is promoted as a private group founded by a private citizen. David Rockefeller. Yet its objectives and operations are public policy oriented. In the words of the Trilateral Commission: The full Commission gathers once each year—in Lisbon in 1992, in Washington in 1993, in Tokyo in 1994. In addition to special topical sessions and reviews of current developments in our regions, a substantial portion of each annual meeting is devoted to consideration of draft reports to the Commission. These reports are generally the joint product of authors from each of the three regions who draw on a range of consultants in the course of their work. Publication follows discussion in the Commission's annual meeting. The authors are solely responsible for their final text. A separate publication contains the principal presentations at the annual meeting. Occasionally informal papers appear from regional activities. ...