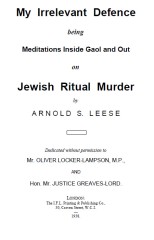 "Ye are of your father the devil and the lusts of your father ye will do. He was a murderer from the beginning. . . ." –– St. John, viii, 44. "In order to destroy the prestige of heroism for political crime, we shall send it for trial in the category of thieving, murder, and every abominable and filthy crime. Public opinion will then confuse in its conception this category of crime with the disgrace attaching to every other and will brand it with the same contempt." –– Protocol 19, Protocols of the Elders of Zion. "If I am killing a rat with a stick and have him in a corner, I am not indignant if he tries to bite me and squeals and gibbers with rage. My job is, not to get angry, but to keep cool, to attend to my footwork and to keep on hitting him where it will do the most good." –– A. S. Leese, speaking at Reception, 17th Feb., 1937, on his return from prison. ...