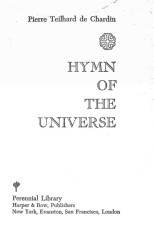 TRANSLATOR'S NOTE. In this book it is almost always P£re Teilhard the man of prayer rather than the man of science who speaks to us. As Sir Julian Huxley wrote of The Mass on the World, it is a "truly poetical essay ... at one and the same time mystical and realistic, religious and philosophical." This does not mean, of course, that the author ever forgets or betrays his science; what it does mean is that the reader's approach, and response, to these pages must of necessity be quite different from those demanded by the scientific works. The mystic, the poet use language in a way essentially different from that of the scientist. In his study of St John of the Cross in The Degrees of Knowledge, M. Maritain defined this difference with clarity and exactitude in terms of the contrast between the (poetical) language of the mystic and the (scientific) language of the theologian, and pointed out the disastrous results of reading the former as though it were the latter. The cum of scientific language is to provide exactly defined and unambiguous statements about reality; that of poetic language is to communicate reality itself, as experienced, by means of imagery, evocation, tone, and the ambiguity—or rather ambivalence—of paradox, of symbol That is not to say that poetic language is nebulous, vague, uncertain: on the contrary, the cutting edge of great poetry is sharper and digs deeper than that of any prose; But we shall never hear what the mystic (or the poet or the musician) has to tell us if we are listening on the wrong wave-length. "God needs man" said Angelus Silesius. If this were a scientific-theological statement it would be an absurdity, just as if Christ's "Lazarus our friend is sleeping" were a scientific-medical statement it would be a falsehood. The theologian has to restate, laboriously and at length, in his own language what is contained in the mystic's flash of intuition. (The words of Silesius come to mind because there are lines in this book which both echo them and elucidate them.) Thus there is no need for us to be alarmed at such ideas as that of God "animating" the world of matter, or of the whole world "becoming incarnate": we shall find plenty of parallels in St Paul and in the traditional theological doctrine of the omnipresence of God. And at the same time it should perhaps be said that, while an acquaintance with P&re Teilhard's scientific works must naturally be helpful in understanding fully this present book, it is by no means necessary to know, still less to be in full agreement with, the author's scientific theory in order to be profoundly stirred and illumined by these pages. ...