Savitri Devi - The lightning and the Sun 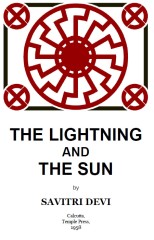 To the god-like Individual of our times; the Man against Time; the greatest European of all times; both Sun and Lightning: ADOLF HITLER, as a tribute of unfailing love and loyalty, for ever and ever. “The foolish disregard Me, when clad in human semblance....” The Bhagavad-Gita, IX, verse 11. “Was der Tod der Elf einmal bedeuten wird, vermögen heute nur wenige zu ahnen — noch weniger kann ich darüber schreiben. Wir stehen mitten in einer grossen Zeitenwende. Was wir alle durchmachen sind ihre Geburtswehen. Alles scheint negativ — und einmal wird dann doch Neues and Grosses geboren werden....” RUDOLF HESS (From a letter to his wife, written on the 28th October, 1946, — twelve days after the hanging of the Martyrs of Nüremberg). PREFACE This book, — begun in Scotland in the spring of 1948, and written, at intervals, in Germany, between that date and 1956, — is the result of lifelong meditations upon history and religions, as well as the expression of lifelong aspirations, and of a scale of moral values, which was already mine before the First World War. It could be described as a personal answer to the events of 1945 and of the following years. And I know that very many people will not like it. But I have not written it for any other purpose than that of presenting a conception of history — ancient and modern — unassailable from the standpoint of eternal Truth. I have therefore endeavoured to study both men and facts in the light of that idea of the succession of Ages, from pristine Perfection to inevitable chaos, which pertains not merely to “Hinduism,” but to all forms of the One, universal Tradition, — the Hindus being, (perhaps) but those who have retained somewhat more of that Tradition than less conservative people. It may sound ironical that so intense a yearning after faithfulness to Tradition should have led me to an interpretation of historic personalities so different from that of most people who profess interest in things of the spirit. The endless future alone will tell who has understood divine Wisdom the best: those people or myself. SAVITRI DEVI Calcutta, 21st of July, 1958 ...