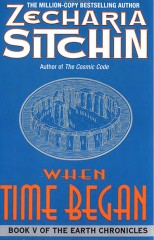 FOREWORD. Since the earliest times, Earthlings have lifted their eyes unto the heavens. Awed as well as fascinated, Earthlings learned the Ways of Heaven: the positions of the stars, the cycles of Moon and Sun, the turning of an inclined Earth. How did it all begin, how will it end—and what will happen in between? Heaven and Earth meet on the horizon. For millennia Earthlings have watched the stars of the night give way to the rays of the Sun at that meeting place, and chose as a point of reference the moment when daytime and nighttime are equal, the day of the Equinox. Man, aided by the cal- endar, has counted Earthly Time from that point on. To identify the starry heavens, the skies were divided into twelve parts, the twelve houses of the zodiac. But as the millennia rolled on, the "fixed stars" seemed not to be fixed at all. and the Day of the Equinox, the day of the New Year, appeared to shift from one zodiacal house to another; and to Earthly Time was added Celestial Time— the start of a new era, a New Age. As we stand at the threshold of a New Age, when sunrise on the day of the spring equinox will occur in the zodiacal house of Aquarius rather than, as in the past 2,000 years, in the zodiacal house of Pisces, many wonder what the change might portend: good or evil, a new beginning or an end—or no change at all? To understand the future we should examine the past; because since Mankind began to count Earthly Time, it has already experienced the measure of Celestial Time—the arrival of New Ages. What preceded and followed one such New Age holds great lessons for our own present station in the course of Time. ...