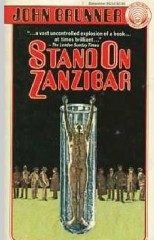 For toDAY third of MAY twenty-TEN ManhatTEN reports mild spring-type weather under the Fuller Dome. Ditto on the General Technics Plaza. But Shalmaneser is a Micryogenic (R) computer bathed in liquid helium and it's cold in his vault. (DITTO Use it! The mental process involved is exactly analogous to the bandwidth-saving technique employed for your phone. If you've seen the scene you've seen the scene and there's too much new information for you to waste time looking it over more than once. Use "ditto". Use it! The Hipcrime Vocab by Chad C. Mulligan) Less of a machine, more of a human being, but partaking of the nature of both, Georgette Tallon Buckfast is largely supported by prosthetics in her ninety-first year. When the strain becomes TOO MUCH it's because Hitrip of California bred it to have less stalk per ounce, more clean-queen leaf. Ask "The Man who's Married to Mary Jane"! Eric Ellerman is a plant geneticist with three daughters who's scared because his wife has developed a permanent pot-belly. "... and Puerto Rico today became the latest state to ratify the controversial dichromatism provision of United States eugenic legislation. This leaves only two havens for those who wish to bear disadvantaged children: Nevada and Louisiana. The defeat of the baby-farming lobby removes a long-time stigma from the fair brow of the Junior-but-One State - a congenital stigma, one may say, since the J-but-O State's accession to hoodness coincided almost to the day with the first eugenic legislation concerned with haemophilia, phenylketonuria and congenital imbecility ..." Poppy Shelton has believed in miracles for years, but now there's one happening right inside her body and the real world is leaning on her dreams. THE DIFFICULT WE DO AT ONCE. THE IMPOSSIBLE TAKES A LITTLE LONGER. Base version of General Technics motto. ...